A “view” from the South Lawn: The constitutional oath 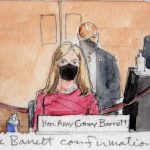 On Monday morning, after Air Force One landed in Allentown, Pennsylvania, for a campaign event, President Donald Trump was asked by the press pool whether he was planning a White House event to celebrate the presumed confirmation of Amy Coney Barrett to the Supreme Court.

“Yeah, we’re going to see probably at the White House later on this evening, see how it all works out,” Trump said. “The vote is taking place, and we’ll see how that works out.”

Would it be a large event, he was asked, and was he concerned about … Before the reporter could complete a question about COVID-19, and the Sept. 26 Rose Garden event to unveil Barrett, which was followed by a spate of positive coronavirus tests among those in attendance, including the president, he answered.

I arrive at the White House just as the Senate vote has worked out nicely for the president and for Barrett, who is confirmed 52-48 to succeed the late Justice Ruth Bader Ginsburg. Moments after the vote, the Supreme Court Public information Office emails a release announcing that Chief Justice John Roberts will administer the judicial oath to Barrett at the court on Tuesday.

“Upon administration of that oath, she will be able to begin to participate in the work of the court,” the press release says. I mention the release to the handful of reporters and photographers hanging around the White House press briefing room waiting for this evening’s ceremony.

“So, the oath tonight is just for show?” one photographer asks.

Well, glad you asked. No, tonight’s oath is not just ceremonial. It is one of the two oaths required for the office. While the chief justice will administer the judicial oath, Justice Clarence Thomas will be administering the constitutional oath.

I explain to the small group that I wrote about this in some detail in SCOTUSblog in 2017, after Neil Gorsuch was confirmed. I would be happy to send the link, I say. That’s OK, they say.

Trump arrived back at Andrews Air Force Base from his multi-stop campaign swing in Pennsylvania within the last hour. But instead of flying on Marine One back to the White House, he rode in the motorcade.

We are soon escorted to the South Lawn, where it is immediately evident why a helicopter can’t land there this evening. The White House has invited probably 200 guests to this event, seemingly more than the number in attendance at Barrett’s Rose Garden event a month ago. But the South Lawn provides much more room to spread out chairs. And it seems that every attendee is wearing a mask.

The White House is brilliantly lit, and the mansion makes for a more impressive backdrop than the West Wing, which is what looms behind speakers at Rose Garden events. Because it is evening, and because the crowd is so spread out and masked, it is a bit harder to identify luminaries in the crowd. Maureen Scalia is here, as she was at the Rose Garden event. She is with her son, U.S. Secretary of Labor Eugene Scalia. I think I see Secretary of the Treasury Steve Mnuchin in the front row with them. Virginia Thomas, the wife of Justice Thomas, takes a seat near the front as well.

A number of Republican senators are here, including Marsha Blackburn of Tennessee, Mike Braun of Indiana, Bill Cassidy of Louisiana, Kevin Cramer of North Dakota, Ted Cruz of Texas, Steve Daines of Montana, Ron Johnson of Wisconsin, James Lankford of Oklahoma, Mike Lee of Utah, and Martha McSally of Arizona. (Trump, during his remarks, will give a shoutout to Senate Majority Leader Mitch McConnell of Kentucky and Sen. Lindsey Graham of South Carolina, the chairman of the Judiciary Committee. But I can’t see for sure that they are here, and McConnell in particular has been avoiding the White House because of COVID concerns.)

Vice President Mike Pence does not appear to be here.

Also not here are any other members of the court. For the White House swearing-in ceremonies of Neil Gorsuch and Brett Kavanaugh, all eight then-current members of the court were in attendance, as was retired Justice Anthony Kennedy, who handled the swearing-in duties for his former clerks. There was some thought that the court wished to be present as a symbol of the Third Branch, just as the president often attends a new justice’s formal investiture in the courtroom.

But the pandemic, among other conceivable reasons, is likely keeping the other justices home tonight.

A few minutes after 9 p.m., a voice announces the entrance of the president, “accompanied by Justice Clarence Thomas and Justice Amy Coney Barrett.”

Not so fast. Barrett hasn’t taken any oaths yet. And the event is reminiscent of the last time a White House swearing-in ceremony was held on the South Lawn. That was Thomas’s ceremony in 1991. At that event, Justice Byron White administered the constitutional oath, but noted in a brief prelude that Thomas wouldn’t be a fully installed justice until he took his judicial oath as well, which was scheduled for several days later at the court. (The second oath was moved up. Again, it’s all in this lovingly detailed account.)

Trump thanks Barrett’s husband, Jesse, and notes that the seven Barrett children, “who have become, really, just very, very popular in this nation,” are back home in Indiana. One wonders if the household, which Barrett has noted is the same number as a full Supreme Court, will hit the road to move from South Bend to Washington at some point. Nine scorpions in a minivan.

“Justice Barrett has made clear she will issue rulings based solely upon a faithful reading of the law and the Constitution as written, not legislate from the bench,” the president continues.

Soon, he asks Thomas to administer the oath. Similar to what happened with Gorsuch’s Rose Garden ceremony is 2017, Barrett and Thomas step away from the lectern and apparently no one on the White House’s audio-visual team has thought about mic-ing up the area where they are standing. So as Thomas begins the constitutional oath, some guests in the back turn to each other, with one asking, “Is he saying the oath?”

Barrett moves back to the lectern for a round of “thank you”s and a few remarks.

“Federal judges don’t stand for election,” she says. “Thus, they have no basis for claiming that their preferences reflect those of the people. This separation of duty from political preference is what makes the judiciary distinct among the three branches of government.”

She continues: “A judge declares independence not only from Congress and the president, but also from the private beliefs that might otherwise move her. The judicial oath captures the essence of the judicial duty the rule of law must always control.”

Tonight, as the president promised, has been a nice event. When Barrett takes that second oath, on Tuesday at the court, she will become the 115th justice of the Supreme Court.

The post A “view” from the South Lawn: The constitutional oath appeared first on SCOTUSblog.