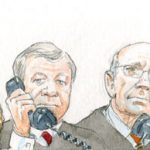 If the justices – like many of us – were up late on Tuesday night watching election returns, it was hard to tell when they took the virtual bench on Wednesday morning to hear oral argument in an important case involving a clash between religious freedom and laws and policies that protect LGBTQ rights. When the justices considered a similar dispute two years ago, in the case of a Colorado baker who refused to make a custom cake to celebrate a same-sex wedding because he believed that doing so would violate his religious beliefs, they ruled for the baker without deciding whether requiring him to bake the cake would violate his First Amendment rights. After nearly two hours of debate Wednesday in Fulton v. City of Philadelphia, it once again seemed that the court might rule for the challenger, but without necessarily issuing a sweeping pronouncement about religious rights and the First Amendment.

The lawsuit before the court on Wednesday was filed by Catholic Social Services, a foster-care organization associated with the Archdiocese of Philadelphia, and two foster parents. CSS works with the city of Philadelphia by certifying prospective foster parents, but the organization says that its Catholic beliefs bar it from certifying unmarried couples or same-sex married couples to be foster parents. When city officials learned in 2018 that CSS would not certify same-sex couples, the city council instructed the city agency that operated the foster-care system to cut off referrals to CSS. CSS went to federal court in 2018, arguing that the city’s action violated CSS’ religious freedom. Both a federal district court and the U.S. Court of Appeals for the 3rd Circuit rejected CSS’ request for an order that would require the city to resume referrals to the organization.

At Wednesday’s argument, the discussion returned several times to whether CSS was acting as a government contractor, which would give the city more leeway in regulating it. Jeffrey Fisher, the Stanford law professor who argued on behalf of two Philadelphia-area nonprofit groups that entered the case to defend the city’s policy, told the justices that because CSS was a government contractor, all that matters is whether the government’s position was reasonable.

Chief Justice John Roberts echoed this point in his questions for Lori Windham, who argued on behalf of CSS. Roberts acknowledged that CSS’ case involved religious rights, which are in tension with the right to same-sex marriage recognized in 2015 in Obergefell v. Hodges. However you think that tension should be resolved, Roberts said, shouldn’t the city get to strike the balance however it wants when setting conditions for its own foster-care program?

Justice Elena Kagan seemed to agree that the city should have more latitude in dealing with contractors. She asked Windham about a hypothetical state that contracted the operation of its prisons out to private companies and wanted to impose a requirement that none of the private companies’ employees could use drugs. Couldn’t the government turn down, she asked, a company that said it wanted to be able to use peyote, a hallucinogenic drug used in religious ceremonies by some Native Americans?

Justice Clarence Thomas suggested that the case involved both contractual relationships and licensing, in which the city would have less latitude.

Justice Samuel Alito was clearly sympathetic to CSS. He told Neal Katyal, the lawyer representing the city, that “if we are honest about what’s really going on here,” the case is “not about ensuring that same-sex couples in Philadelphia have the opportunity to be foster parents.” Rather, Alito contended, Philadelphia “can’t stand the message that Catholic Social Services and the archdiocese are sending by continuing to adhere to the old-fashioned view about marriage.”

Both Alito and Justice Brett Kavanaugh emphasized that CSS had never turned away a same-sex couple that wanted to serve as foster parents, and that the city’s policy might result in some children losing out on the opportunity to be placed with foster parents. Kavanaugh added that although he appreciated the “stigmatic harm” that same-sex couples would feel as a result of CSS’ policy, the court needed to “find a balance that also respects religious beliefs.” “What I fear here,” Kavanaugh said, “is that the absolutist and extreme position would require us to go back on the promise of respect for religious believers.”

The justices also focused on whether there were exemptions to the city’s non-discrimination policy, or whether it is instead the kind of policy shielded by the court’s 1990 decision in Employment Division v. Smith, which held that government actions do not violate the Constitution’s free exercise clause as long as they are neutral and apply to everyone. Arguing for the federal government, Hashim Moopan, who serves as a counselor to the U.S. solicitor general, stressed that the city both discriminates and allows other kinds of discrimination in the foster-care system. For example, the city may consider factors such as race or disability in placing children with foster parents, and it permits agencies to concentrate their work on families with specific ethnicities.

But by the time the city gets to the point at which it is ready to place foster children, Fisher stressed, it is a different setting. Responding to a question from Gorsuch about whether the court should consider the exemptions at the placement stage in determining whether Smith applies, Fisher answered that “Smith did not say the mere availability in the air of individualized treatment is enough to” render a law not generally applicable. What Smith requires, Fisher explains, is actual “disparate treatment” of religion.

Alito seemed to suggest that the justices should, as the challengers suggested, overrule the court’s decision in Smith. He conceded that the court does not normally decide constitutional questions when it does not have to. But he implied that the “complicated questions” about possible exemptions from the non-discrimination policy and whether CSS was a contractor indicated that Smith lacked “stability” – and presumably should be overruled.

The court’s newest justice, Amy Coney Barrett, appeared less enthusiastic about overruling Smith. If you are correct that you could prevail even under Smith, she asked Windham, why should we overrule it, and what would you replace it with?

Other justices seemed to share Barrett’s lack of appetite for overruling Smith, and they focused instead on more practical concerns – in particular, what a ruling for CSS might mean for other objections based on religious beliefs. For example, would a ruling in CSS’ favor allow an agency to refuse to certify interracial couples? In response to a question from Barrett, Windham emphasized that the Supreme Court has been very clear that the government has a strong interest in eradicating racial discrimination.

Both Breyer and Kagan were clearly frustrated by the suggestion that racial discrimination should be treated differently from gender or LGBTQ discrimination. But Moopan countered that the court has specifically indicated that “race is unique in this country’s constitutional history, and eradicating that type of racial discrimination presents a particularly unique and compelling interest.”

Alito was less concerned. “Didn’t we say in Obergefell that there are honorable reasons to continue to oppose same-sex marriage?” But, he continued, the court has never said anything similar about interracial marriage.

Breyer tried to broker a compromise, in which CSS would not have to endorse same-sex marriage but instead simply weigh in on whether a same-sex couple would provide an adequate foster home. Windham rejected that proposal, saying that it would still violate CSS’ religious beliefs because a home study is a written endorsement of the relationships in that home. There is no case, she pointed out, that says that the government can coerce speech as long as the speaker can add a disclaimer to the end.

Sotomayor picked up on Breyer’s suggestion toward the end of the argument, asking Fisher to offer a compromise that “wouldn’t do real damage” to all of the different legal theories involved in the dispute. Fisher endorsed Breyer’s proposal, arguing that if CSS is worried that it is endorsing same-sex marriage, it can make clear that it is following state law, not purporting to speak for itself.

By the time Roberts announced, shortly before noon on Wednesday, that the argument was over, it appeared that CSS and the foster parents likely would be able to garner at least five votes for a ruling in their favor, even if it wasn’t clear what the basis for such a ruling might be. A decision in the case is expected sometime next year.