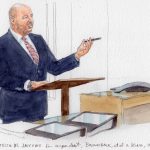 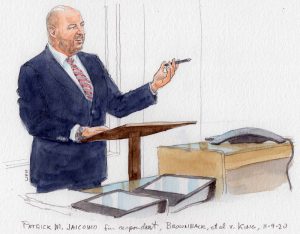 While assigned to an FBI task force, Officers Douglas Brownback and Todd Allen mistakenly assumed James King might be a home invasion suspect. They stopped King, and when King put up a struggle, the officers pummeled him. King filed suit alleging claims against the officers under Bivens v. Six Unknown Named Agents of Federal Bureau of Narcotics­ — which allows individuals to sue federal officials for violating their constitutional rights — and claims against the United States under Section 1346(b) of the Federal Tort Claims Act — which allows individuals to sue the United States for civil wrongs under relevant state tort law committed by federal employees.

King sought review of the Bivens ruling in the U.S. Court of Appeals for the 6th Circuit. Before deciding the case, the 6th Circuit requested briefing on whether the FTCA’s “judgment bar” prohibited King from pursuing his Bivens claims. The FTCA judgment bar provides:

The judgment in an action under section 1346(b) of this title shall constitute a complete bar to any action by the claimant, by reason of the same subject matter, against the employee of the government whose act or omission gave rise to the claim.

The federal government sought review by the Supreme Court, and the justices granted that request in March. Much of Monday’s oral argument in Brownback v. King focused on what question the court was actually being asked to decide, because in many ways, the government and King were focused on different, but related, issues.

Justice Sonia Sotomayor framed it helpfully: There is the “jurisdictional argument” — that a dismissal for lack of subject–matter jurisdiction does not have preclusive effect. This was the basis for the 6th Circuit’s holding and constitutes the bulk of the government’s merits briefing on why the 6th Circuit was wrong. And then there is the “same case argument” King is pressing — that the FTCA judgment bar does not apply to claims filed within the same suit, which is an alternative basis to affirm the 6th Circuit’s ruling.

Michael Huston, assistant to the solicitor general, argued for the government. When he asserted that the FTCA judgment bar applies to claims in the same suit, Chief Justice John Roberts expressed doubt: “As you read the statute, the disposition of an FTCA claim bars Bivens claims against the employee. But, of course, the statute speaks of actions, not – not claims.”

Huston responded that Congress would have said “subsequent action” if it intended to bar only future suits, and that by using the phrase “any action,” Congress meant the term “to be essentially synonymous with ‘claim.’”

Sotomayor, along with Justices Elena Kagan and Brett Kavanaugh, seemed skeptical about this reading of the statute, with Kavanaugh again pointing out that “the key problem for you is [that the statute] says ‘any action,’ not ‘any claims.’”

However, it is unclear whether the court will ultimately reach the “same case” issue. Justices Clarence Thomas, Samuel Alito and Kavanaugh seemed hesitant about whether the court should consider the argument at all, given that it was not the basis for the 6th Circuit’s decision, the question presented did not frame it as the dominant issue in the case, and most circuits that have decided the issue have ruled against it, albeit in different ways.

Patrick Jaicomo from the Institute for Justice argued for King. The chief justice focused on the jurisdiction argument, and maintained that the court had held, contrary to what Jaicomo was arguing, that “if you make a determination under the merits, there isn’t the established jurisdiction against the United States, that they’re treated the same.” Under this view, the judgment bar would apply to a situation where a plaintiff failed to plead an adequate FTCA claim. Jaicomo responded that to trigger the judgment bar, “a claim has to allege a valid cause of action,” which is consistent with how the court treats the sovereign immunity statute.

Thomas again surfaced his skepticism about whether the “same case” argument should be entertained, asking “why should we even consider your argument that the judgment bar doesn’t apply when the claims are brought together?” Jaicomo responded that the court should consider this question not only because it is “what the language of the statute requires,” but also because “that question is embedded in the question presented that the government brought to this Court.” Jaicomo emphasized this argument was raised below and is fully briefed and ripe for consideration.

Justice Stephen Breyer pressed Jaicomo about the policy implications of his position, stating that under Jaicomo’s reading of the FTCA, a plaintiff could collect damages from both the United States and the employee. Wasn’t this “the very thing that the statute was passed to stop?” Breyer asked. Jaicomo responded that Congress did not in fact intend to stop recoveries against employees.

On the other hand, Sotomayor had “practical difficulties with the government’s position on the same action,” pointing out that “what the government is encouraging plaintiffs to do is to file their Bivens claims first, win or lose, then file their FTCA claims.”

Kagan asked Jaicomo what was wrong with the government’s position that in the FTCA judgment bar, “claim” is synonymous with “action.” Jaicomo responded that the government’s definition is “well outside the mainstream,” pointing to Black’s Law Dictionary for support.

Justice Neil Gorsuch called this textual argument “forceful,” but returned to the threshold question raised by his some of his colleagues: “why we should consider that issue at this time in this case, given the way it was developed in the 6th Circuit.”

It is unclear after oral argument whether the court will reach King’s “same case” argument. If the court does, however, it seems that a number of the justices agree that he has the better reading of the FTCA judgment bar.