A new study of the Vermont police has raised questions about the effectiveness of racial bias training.

The study, conducted by professors at the University of Vermont Economics Department and Cornell University researchers, found that despite small improvements in some departments, comprehensive training and education aimed at training officers to recognize and avoid racially biased practices “did not by and large alter police behavior,” specifically for traffic stops.

The researchers examined police traffic stops by agencies in seven Vermont towns and cities and by the Vermont State Police over the past four years.

“Black drivers [are] still much more likely to be stopped and searched than white drivers [by 4 times] and less likely, in all but one town, to be found with contraband during a search [by 5 percent],” the study concluded.

Bias training is now mandated in many police departments around the country.

According to a recent story in the Wall Street Journal, a program to fight implicit bias among New York Police Department officers successfully changed many officers’ attitudes, according to an analysis of the effort commissioned by NYPD officials.

Implicit bias, sometimes defined as the unconscious practice of linking groups to stereotypes, is believed by social scientists to affect the perceptions and behavior of people. It has become an important part of discussions around race and policing, gaining prominence with the rise of the Black Lives Matter movement and widespread protests.

The fact that traffic stop racial disparities and bias remain extensive in Vermont, a state known for its progressive attitudes and policies, deepens concerns about the effectiveness of similar programs in other states. 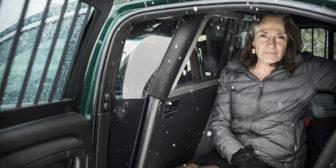 Stephanie Seguino, a co-author of the study, said in a recent interview with VT Digger, “What we did find is that for some towns there was pretty consistent evidence that things are getting worse or staying the same.”

Data indicates that in some towns, Black drivers were over-stopped by police officers with an increase of between 55 percent to 236 percent of cases compared to years prior, according to the report.
In her interview with VT Digger, Seguino said that since different analytical measures are used in the data reviews, it’s hard to “rank” law enforcement agencies from best to worst when it comes to racial disparities in traffic stops.

She did, however, mention two specific agencies — the Vermont State Police and the South Burlington Police Department — as making more progress than others.

The researchers say the Vermont State Police is using these findings to “hold a mirror up to itself” to find ways to improve.

“The disparities are still there and they are frustrating,” Capt. Garry Scott, the state police’s Fair and Impartial Policing and Community Affairs director, told VT Digger in response to the study’s release.

“The arrest and the search and finding are still trends we are not happy with in any way,” Scott concluded.

To help make future improvements following the release of this study, the Vermont State Police said it was “sharing results with its troopers, and linking performance evaluations of its commanders to their effectiveness in promoting bias-free policing.”

The authors commended the move, but added it will take time to identify if changes are made.

The study “makes clear that racial bias and negative racial stereotypes permeate our country, regardless of where you are,” Cornell University visiting associate professor and data analyst for this research, Nancy Brooks, said.

“No state is immune,” Brooks concluded.

Stephanie Seguino is a University of Vermont Economics professor, as well as a Research Associate of the Political Economy Research Institute at the University of Massachusetts/Amherst and a Fellow of the Gund Institute for the Environment.

Nancy Brooks is a Cornell AAP Architecture Art Planning Visiting Associate Professor. She is also the Director of Graduate Studies.

Pat Autilio, a data analyst, contributed to the research.

The full study and tables can be accessed here.