Case preview: When does a statutory “judgment bar” prevent lawsuits against federal officers for constitutional violations? 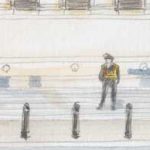 Twenty-one-year-old college student James King was walking between his summer jobs one afternoon. On his walk, he was approached by two plain-clothes officers, Douglas Brownback and Todd Allen, who were assigned to an FBI fugitive task force in Grand Rapids, Michigan. Brownback and Allen were on the lookout for a home invasion suspect. They did not have a clear or recent picture of the suspect, but they knew he was a 26-year-old white male, between 5-feet-10-inches and 6-feet-3-inches tall, who wore glasses, and apparently bought soda from the same gas station around the same time every day. Unfortunately for King, he fit the general description and was walking near the gas station, so Brownback and Allen decided to stop him.

While King at first acquiesced to the stop after spying badges hanging around the officers’ necks, when the officers took his wallet from his pocket, King asked if he was being mugged and tried to run away. The officers tackled him to the ground, and when King put up a struggle, they choked him and punched him repeatedly in the head, causing one onlooker to tell the 911 operator that the officers were “gonna kill this man.” As it turns out, King wasn’t the suspect. And when the state of Michigan nevertheless prosecuted King for resisting arrest, a jury acquitted him of all charges.

King sued the United States under the Federal Torts Claims Act, alleging that the officers committed a number of torts – the legal term for wrongful acts that cause injury and provide the injured person with the right to file a civil lawsuit under state law. He also sued the officers under Bivens v. Six Unknown Named Agents of Federal Bureau of Narcotics, a landmark 1971 case in which the Supreme Court held that individuals may sue federal officials for violating their constitutional rights.

Congress passed the FTCA in 1946 out of “a feeling that the Government should assume the obligation to pay damages for the misfeasance of employees in carrying out its work.” Section 1346(b)(1) of the FTCA allows for damages suits against the United States for certain civil wrongs committed by government employees acting within their scope of employment. Namely, a suit can be brought “under the circumstances where the United States, if a private person, would be liable to the claimant in accordance with the law of the place where the act or omission occurred.” Put another way, the FTCA allows plaintiffs to pursue state law tort claims against the United States government in federal court.

Importantly, Section 2676 of the FTCA includes a so-called “judgment bar” that was designed to prevent duplicative lawsuits arising from a single event. It provides that a “judgment” in an FTCA action “shall constitute a complete bar to any action by the claimant, by reason of the same subject matter, against the employee of the government whose act or omission gave rise to the claim.”

On appeal to the U.S. Court of Appeals for the 6th Circuit, King decided not to pursue the FTCA claims. He wished to go forward only on the Bivens claims. The officers argued that further pursuit of the Bivens claims was precluded by the FTCA’s judgment bar. A divided panel of the 6th Circuit disagreed, holding that when an FTCA claim is dismissed for lack of subject–matter jurisdiction, that is not a “disposition on the merits” implicating the judgment bar. The court then concluded the officers were not entitled to qualified immunity from the Bivens claims. The federal government asked the Supreme Court to review the case, and in March, the justices agreed to do so.

The case, Brownback v. King, which will be argued on Monday, asks the Supreme Court to decide the scope of the FTCA’s judgment bar. The court must choose between dueling text-based interpretations of the FTCA and decide how common law principles that limit the ability to raise a claim in court play into the proper interpretation of the text.

In brief, the solicitor general argues that under the text of the FTCA, King’s Bivens claims are foreclosed. The SG maintains that because the Bivens claims involve the same officers as the dismissed FTCA claims and are “based on the same underlying facts,” the FTCA judgment bar applies. The SG says the federal government’s interpretation of the judgment bar is faithful to Congress’ overarching goal in passing the FTCA of avoiding duplicative litigation.

For his part, King also looks to the text of the FTCA but argues that the judgment bar does not apply because it applies only to “actions” — i.e., separate suits, not claims within the same suit — and “judgments” — i.e., decisions on the merits, not dismissals on jurisdictional grounds. King also argues that his reading of the FTCA aligns with Congress’ intent, because to adopt the government’s interpretation would encourage litigants to sue federal employees first before pursuing damages against the United States, which would lead to the very duplicative litigation that the government fears.

King has high-power amicus support from members of Congress, law professors and groups across the ideological spectrum. Worth highlighting is a brief filed by the Cato Institute, which centers the on-the-ground implications of the case. Cato argues that the government’s broad interpretation of the FTCA’s judgment bar will “lead to less accountability for a large swath of law enforcement — federal, state, and local — that police Americans every day.” Cato points out that federal law enforcement has a muscular role in “front-line policing,” specifically noting that federal officers have been responding with increasing force to recent racial justice protests. It’ll be interesting to see whether that concern features at oral argument, especially given the court’s cabining of Bivens actions in recent years.

The post Case preview: When does a statutory “judgment bar” prevent lawsuits against federal officers for constitutional violations? appeared first on SCOTUSblog.