Justices to continue remote arguments through the end of the year 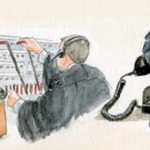 The Supreme Court announced on Friday that it would continue to hear oral argument by telephone for the rest of the calendar year. In a press release from the court’s Public Information Office, the court indicated that, in response to the COVID-19 pandemic, the justices and lawyers will participate in the arguments scheduled for the November and December arguments sessions remotely, with live audio available to the public.

The announcement comes two days after the court finished the first week of arguments in the October argument session, which began on Monday. Like the telephonic oral arguments in May, which were the first of their kind, the telephonic arguments appeared to have been successful despite the occasional technical problem. Friday’s announcement means that two of the biggest cases of the term thus far, one involving a challenge to the constitutionality of the Affordable Care Act’s individual mandate and another involving religious objections to antidiscrimination laws, will be argued remotely – and can be heard by the public in real time.

The court indicated that it will “continue to closely monitor public health guidance in determining plans for the January argument session,” which begins on Jan. 11, 2021.

The post Justices to continue remote arguments through the end of the year appeared first on SCOTUSblog.