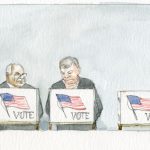 Telling the Supreme Court that there is a “very real possibility that the final presidential election results” could rest on the outcome of voting in Pennsylvania, Republicans in the state asked the justices on Monday to block a ruling by the Pennsylvania Supreme Court that would require election officials to count absentee ballots received within three days after Election Day, Nov. 3, even if they are not postmarked. Without intervention from the justices, the Republican leaders in the state legislature warned, the Pennsylvania court’s ruling “could destroy the American public’s confidence in the election system as a whole.”

The emergency request came from Joseph Scarnati, the president pro tempore of the Pennsylvania State Senate, and Jake Corman, the Senate majority leader, seeking to block a ruling issued on Sept. 17 by the Pennsylvania Supreme Court in a lawsuit filed by the Pennsylvania Democratic Party. Although the Pennsylvania Supreme Court cited concerns about COVID-19 in issuing its order, Scarnati and Corman argued, the state’s legislature has already taken action to minimize the effects of the virus on the administration of the general election. The order, they contended, violates federal election law, which establishes a single Election Day, by allowing ballots cast and received after Election Day to be counted. It also violates the Constitution, they continued, which gives the state’s legislature the power to set the time, place and manner of federal elections. More broadly, they stressed, allowing the state court’s ruling to remain in effect would sow “chaos into the electoral process weeks before” the November election.

A similar request came from the Pennsylvania Republican Party, which joined the dispute to oppose any extension of the Election Day deadline. The Republican Party compared the situation in Pennsylvania to Wisconsin’s April election, when the Supreme Court blocked an order that would have extended the deadline for absentee ballots to be submitted. “A similar modest stay,” the Republican Party suggested, is necessary “to protect the upcoming general election from the taint of counting votes that were illegally cast or mailed beyond” Election Day. The Republican Party asked the justices to enter a temporary stay of the state supreme court’s ruling immediately and to fast-track the briefing on whether to put the ruling on hold, with a response from Pennsylvania Democrats to be due on Wednesday, Sept. 30.

The requests go to Justice Samuel Alito, who is responsible for emergency appeals for the geographic area that includes Pennsylvania. Alito has the option to act on the pleas himself or (as is more likely) to refer it to the full court.

Update (Monday, Sept. 28, 6:30 p.m.): This story has been updated to add information about the Pennsylvania Republican Party’s request.