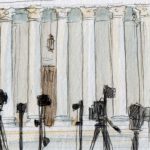 It’s a time of heightened tension. Everyone is on pins and needles. On the first Tuesday after the first Monday in November, all of America wants to know one thing: What cases were relisted after the Supreme Court’s last October conference?

If you read last week’s installment, you already know every issue the court will be reconsidering at this Friday’s conference. But that is not to say that this was a status quo week. A lot happened in relists in the past few days.

To begin with, the court summarily vacated and remanded in two thrice-relisted cases. Mckesson v. Doe, 19-1108, involved First Amendment limitations on imposing damages on a protest organizer. The justices vacated a decision by the U.S. Court of Appeals for the 5th Circuit upholding liability and sent the case back to allow the court of appeals to seek guidance from the Louisiana Supreme Court. Taylor v. Riojas, 19-1261, involved prison officials’ eligibility for qualified immunity for allegedly keeping a prisoner in filthy conditions. The justices vacated another decision of the 5th Circuit, writing that “no reasonable correctional officer could have concluded that, under the extreme circumstances of this case, it was constitutionally permissible to house Taylor in such deplorably unsanitary conditions for such an extended period of time.”

But the court denied review in National Football League v. Ninth Inning, Inc., 19-1098, involving antitrust claims arising out of licensing television rights to out-of-market games. At least the NFL got the consolation prize of an opinion respecting denial from Justice Brett Kavanaugh. He cautioned that declining to review the court of appeals’ affirmance of a decision denying a motion to dismiss “should not necessarily be viewed as agreement with the legal analysis of the the Court of Appeals,” and the NFL might file a new petition if the league don’t prevail on summary judgment or after trial. If you can’t get review, a high-profile vote of confidence from the court’s likely median justice is the next best thing. The news was significantly worse for two other relists: Review was denied without comment in capital case Dailey v. Florida, 19-7309, involving hearsay rules, and Woodard v. United States, 20-5758, involving the “stacking” of mandatory minimum firearm sentences prosecuted together.

Since last week was light, I previewed a couple nonrelisted cases that struck me as likely grants. That excursion outside my lane paid off this week, as those cases are this week’s only new relists. Carr v. Saul, 19-1442, and Davis v. Saul, 20-105, both involve an issue of particular interest to the Supreme Court recently — separation of powers. Specifically, the cases ask whether a claimant seeking disability benefits under the Social Security Act forfeits an appointments clause challenge to the appointment of the administrative law judge overseeing his or her case by failing to present that challenge during administrative proceedings. The government concedes that there is a circuit conflict on the issue and says that both cases are “appropriate vehicles” for resolving the conflict. But “[b]ecause the petition … in Carr was filed first,” the government says “the Court may wish to grant that petition and hold [Davis] pending the disposition of that case.” We’ll find out soon what the court thinks.

That’s all for now. Stay safe out there!

Carr v. Saul, 19-1442
Issue: Whether a claimant seeking disability benefits under the Social Security Act forfeits an appointments-clause challenge to the appointment of an administrative law judge by failing to present that challenge during administrative proceedings.
(relisted after the Oct. 30 conference)

Davis v. Saul, 20-105
Issue: Whether a claimant seeking disability benefits under the Social Security Act forfeits an appointments-clause challenge to the appointment of an administrative law judge by failing to present that challenge during administrative proceedings.
(relisted after the Oct. 30 conference)

Shinn v. Kayer, 19-1302
Issue: Whether the U.S. Court of Appeals for the 9th Circuit violated 28 U.S.C. § 2254’s deferential standard, and employed a flawed methodology that the Supreme Court has repeatedly condemned, when it granted habeas relief based on a de novo finding that a Sixth Amendment violation had occurred.
(relisted after the Sept. 29, Oct. 9, Oct. 16 and Oct. 30 conferences; record requested before the Oct. 15 conference)