Shemima Begum – a question of fairness and justice 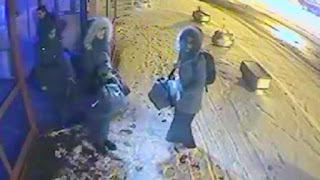 I still remember the sense of horror in 2015 as I followed the news reports of three young, and very vulnerable looking, schoolgirls heading to Syria to join ISIS. I wasn’t the only one who hoped and prayed that something would happen to stop them. It was only ever going to end very badly. Five years on; one is certainly dead, one is missing presumed dead and one has become the most hated person in the country, according to some.

None of this can justify what Shemima Begum did or has since done. She should face justice in this country so that we can discover the truth. There are many politicians and media moguls who are determined to deprive her of justice at all costs.

Last year there was an outcry that she might have the benefit of legal aid, as if popularity was some precondition to fair treatment –

This week, we have seen a similar outcry. She wishes to fight the decision to deprive her of UK citizenship. That is a matter to decided by the courts. The Court of Appeal has decided that this can only be dealt with fairly if she is permitted to come to this country –

“I have reached the firm conclusion that given that the only way in which she can have a fair and effective appeal is to be permitted to come into the United Kingdom to pursue her appeal, fairness and justice must, on the facts of this case, outweigh the national security concerns” Flaux LJ

Whatever you think about her and what she has done, this is a justice issue. We have an independent judiciary whose role is to ensure ‘fairness and justice.’ We are told, rightly in many cases, that terrorists are out to attack our values and our ‘way of life’. These are qualities of that life that we treasure and will defend at all costs. Included among these qualities are ‘fairness and justice’. Why do those precious values become irrelevant when applied to someone who is disliked by the press?

The only thing that is ‘political’ about it, is that politicians don’t like it.

The thought that she might get a fair hearing has produced a chilling reaction. The Telegraph has led calls for judges to excluded from ‘political’ decisions. 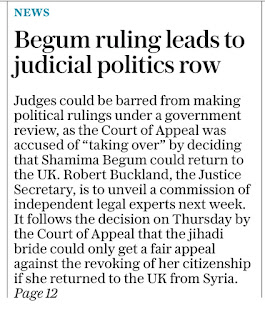 This is not a political decision. It is a decision about how courts can deal fairly with a difficult issue. The only thing that is ‘political’ about it, is that politicians don’t like it. It is certainly not the first time that this government has tried voiced an intention to control the judiciary –

The whole point of justice is to do what is right and fair. This is one of our critical values. It is why we have independent judges. It is why the Lord Chancellor swears to – “respect the rule of law, defend the independence of the judiciary and discharge my duty to ensure the provision of resources for the efficient and effective support of the courts”

We are in a dangerous place if justice is left in the hands of the media or politicians.