Symposium: From the travel ban to the border wall, restrictive immigration policies thrive on the shadow docket 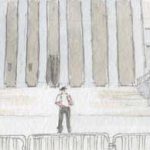 This article is part of a symposium on the Supreme Court’s shadow docket.

Shoba Sivaprasad Wadhia is associate dean for diversity, equity and inclusion and director of the Center for Immigrants’ Rights Clinic at Penn State Law in University Park. She has served as co-counsel on amicus briefs pertaining to some of the cases discussed in this article. She is the author of Banned: Immigration Enforcement in the Time of Trump (NYU Press, 2019) and Beyond Deportation: The Role of Prosecutorial Discretion in Immigration Cases (NYU Press, 2015).

The year was 2017, nearly one year into the Trump administration. I was reacting to the latest procedural move in version three of President Donald Trump’s travel ban, which imposed severe restrictions on travel from a group of predominantly Muslim countries. Litigation challenging the ban was successful in the federal district courts, but in spite of this, the Supreme Court issued twin orders on Dec. 4, 2017, operationalizing the travel ban before the appellate courts had even heard oral arguments in the cases.

The orders themselves were unsigned, without any opinion or analysis, but with a pronounced impact on individuals and families inside the United States and around the world. With winter graduation around the corner, I could see the faces of parents confused and unable to enter the United States to watch their children graduate or witness other milestones because they resided in countries whose nationals were excluded. How could the Supreme Court reinstate such a consequential policy without fully considering the merits of the ongoing legal challenges and without explaining its reasoning?

The answer is that the temporary ruling was issued on the court’s shadow docket, the body of orders and decisions in cases that do not go through the formal process of lengthy briefing and oral argument. In the past three years, much of the shadow docket has been populated by emergency requests from the Trump administration asking the Supreme Court to intervene before the lower courts have reached a final outcome or to override the actions of lower courts without a meaningful review process — or both.

Some of the court’s most significant shadow-docket rulings have occurred in immigration cases, and by and large, these rulings have favored the Trump administration, often at the expense of marginalized immigrants. In this article, I briefly survey four such cases — the travel ban, the asylum transit rule, the funding for the border wall, and the public charge rule — and I explore what the shadow-docket rulings mean for immigration law going forward.

The travel ban refers to a set of policies issued by the administration to block people in qualifying relationships or categories under immigration law from entering the United States. The administration revised the list of restricted countries twice, and the third version of the travel ban entered into the shadow docket after the administration applied for a stay of an injunction issued by a federal district court in Hawaii. The Supreme Court granted that stay, allowing the ban to take full effect while the litigation proceeded through the appeals process. The court’s decision allowed the government to impose country-specific travel restrictions on nationals from eight countries: Chad, Iran, Libya, North Korea, Somalia, Syria, Venezuela and Yemen.

Eventually, the travel-ban challenge was heard and decided by the U.S. Courts of Appeals for the 4th Circuit and 9th Circuit in favor of the plaintiffs. It then returned to the Supreme Court – this time on the court’s regular docket for full consideration of the merits. The court ruled in favor of the administration and upheld the travel ban on June 26, 2018, more than six months after the unsigned orders.

The asylum transit rule refers to a policy announced by the Trump administration on July 15, 2019, that, with very few exceptions as written, blocks those who arrive at the southern border from asylum eligibility if they passed through another country in transit to the United States and did not apply for asylum in that country. The transit rule was challenged in the courts and blocked by a nationwide injunction issued by a federal district court in California. The administration quickly asked the Supreme Court for an emergency stay of that injunction. On Sept. 11, 2019, the Supreme Court agreed to pause the injunction “pending disposition of the Government’s appeal in the United States Court of Appeals for the Ninth Circuit and disposition of the Government’s petition for a writ of certiorari, if such writ is sought.” It thereby restored the transit rule.

As with the travel ban, the Supreme Court’s order was short and unsigned – though it carried a five-page dissent from Justice Sonia Sotomayor decrying the adverse effects on a population of asylum seekers that Sotomayor called “some of the most vulnerable people in the Western Hemisphere.” On July 6, 2020, a three-judge panel of the 9th Circuit affirmed the decision of the district court finding that the rule was contrary to the law. But the stay by the Supreme Court remains in place as of this writing.

In separate proceedings over the summer, the U.S. District Court for the District of Columbia vacated the asylum transit rule. The practical effect of that ruling is complicated by a rule implemented during the coronavirus pandemic that effectively blocks asylum seekers arriving at the southern border from seeking protection.

The Trump administration has allocated billions of dollars of federal funding to the construction of physical barriers across the U.S.-Mexico border. Litigation challenging the authority of the president to use funds for this purpose ensued. Following a permanent injunction by a federal district court, the administration took the same route as in the travel ban and asylum cases: It asked the Supreme Court to stay the injunction. On July 26, 2019, in an unsigned, one-paragraph order (accompanied by a three-page concurrence from Justice Stephen Breyer), the Supreme Court stayed the district court’s injunction and effectively handed a victory to the Trump administration by allowing it to utilize some funds for the wall while the litigation proceeded. While the stay was in place, the 9th Circuit affirmed the district court’s decision.

Nearly one year later, on July 22, 2020, opponents of the wall filed a motion with the Supreme Court requesting that the stay be lifted and arguing that, if the stay were left in place, the administration could potentially complete its construction before the Supreme Court would have a chance to review the 9th Circuit’s decision on the merits. On July 31, 2020, in another shadow-docket ruling, the Supreme Court issued a one-sentence unsigned order refusing to lift the stay. Said Breyer in a short dissent: “The Court’s decision to let construction continue nevertheless, I fear, may ‘operat[e], in effect, as a final judgment.’”

The shadow-docket ruling may not be the final say the justices have on border-wall funding. On Oct. 19, the court granted the administration’s petition for review of the 9th Circuit’s decision, meaning the dispute is now finally scheduled to come before the justices on the regular “merits” docket. (On the same day, the court also decided to review the merits of another controversial immigration policy, known as the “remain in Mexico” policy, which allows the government to return certain asylum-seekers to Mexico while they await proceedings in U.S. immigration court. That policy has its own history of shadow-docket proceedings that allowed it to take effect.)

Meanwhile, litigation over the border wall continues in the lower courts. On Oct. 9, in another ruling involving a separate funding issue, the 9th Circuit barred the government from using emergency authority to build the wall.

The term “public charge” refers to certain immigrants who are deemed likely to become dependent on government aid and thus may be ineligible for green cards or visas. There is no specific definition of public charge, but the immigration statute lists factors such as age, health, family status, financial status and education that should be considered in deciding whether a person is likely to become a public charge.

Since then, litigation has continued in courts across the country (including in a case in the U.S. Court of Appeals for the 7th Circuit in which then-Judge Amy Coney Barrett wrote a dissent defending the administration’s expansion of the public charge rule). On July 29, a federal district court in New York issued a new nationwide injunction against the rule, but the U.S. Court of Appeals for the 2nd Circuit stayed that injunction on Sept. 11. As of this writing, the new public charge rule is in effect nationwide.

In just three years, the Supreme Court’s shadow docket has had a profound impact on the American immigration system. In a series of unsigned emergency orders – far removed from the court’s usual deliberate process – the court has overturned the rulings of district judges and allowed the administration to enact exclusionary immigration policies. The number of requests alone and the rate of success for the administration is breathtaking. It is my hope that a new administration will minimize its use of the shadow docket and return immigration policymaking to the realm of legislation, notice-and-comment rulemaking and regular court process.

The post Symposium: From the travel ban to the border wall, restrictive immigration policies thrive on the shadow docket appeared first on SCOTUSblog.