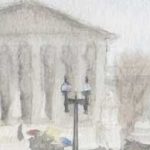 President Donald Trump returned to the Supreme Court on Tuesday in the dispute over efforts by a Manhattan district attorney to obtain access to the president’s financial records. Telling the justices that a federal trial judge had “stacked the deck against the President,” Trump asked the justices to freeze a ruling by the U.S. Court of Appeals for the 2nd Circuit that would allow New York County District Attorney Cyrus Vance to enforce the subpoena to the president’s longtime accountant, Mazars USA.

Tuesday’s filing was the latest chapter in a battle that began when Vance issued a subpoena to Mazars as part of an investigation by a state grand jury into criminal violations of New York law. The president asked a federal court in New York to quash the subpoena, arguing that it could not be enforced while he was still in office, but both the trial court and the 2nd Circuit rejected that request. In July, the Supreme Court handed each side a partial win: It rebuffed the president’s argument that he is categorically immune from state criminal subpoenas, but it sent the case back to the lower courts to allow the president to challenge the subpoena on other grounds.

When the case went back to the district court, it moved quickly. In a new filing, the president argued that the subpoena was a “fishing expedition” that was issued “in bad faith” to harass him. The district court granted Vance’s motion to dismiss the president’s claims, concluding that the president was seeking “absolute immunity through a back door.” The president then appealed to the 2nd Circuit, which upheld that ruling earlier this month.

Trump asked the justices on Tuesday to put the 2nd Circuit’s ruling on hold while he appeals to the Supreme Court. “Allowing this deeply flawed ruling to stand,” he wrote, “will needlessly sow confusion where none presently exists.” More immediately, he added, unless the lower court’s ruling is blocked, the president will be permanently harmed even if his records are only disclosed to the grand jury and prosecutors, because “the status quo can never be restored once confidentiality is destroyed.” But if the records are disclosed to the public, then the case will effectively be over, he continued.

The president’s request will go to Justice Stephen Breyer, who is handling emergency requests from the 2nd Circuit since the death of Justice Ruth Bader Ginsburg. Breyer can act on the request himself or, as is more likely, refer it to the full court.